experience the baroque marvel of brandenburg

Are you planning a visit?

Neuzelle Abbey shines radiantly ahead of the 750th anniversary of its founding. The “Baroque marvel of Brandenburg” is among the most significant artistic treasures in the state. As one of the few completely preserved abbey complexes in Europe, the Cistercian monastery to the south of Frankfurt (Oder) offers a unique blend of architecture, culture and (garden) art.

Visitors feel close to heaven here, amidst the picturesque landscape. The monks agree, as they are returning to the river Oder after 200 years. Cistercian monks of the Holy Cross Order plan to reoccupy Neuzelle Abbey from 2018.

Worthy grounds for celebration: in its anniversary year 2018, Neuzelle Abbey is inviting visitors to enjoy an exquisite programme of cultural events entitled “Close to Heaven” that will remain as fond memories in the minds of its visitors for a long time to come.

You are warmly invited to join the celebrations. 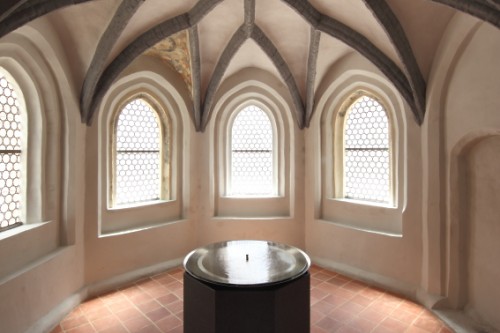 The cloister and its adjoining rooms were constructed between 1380 and 1450 and have been preserved in their late Gothic style. ... 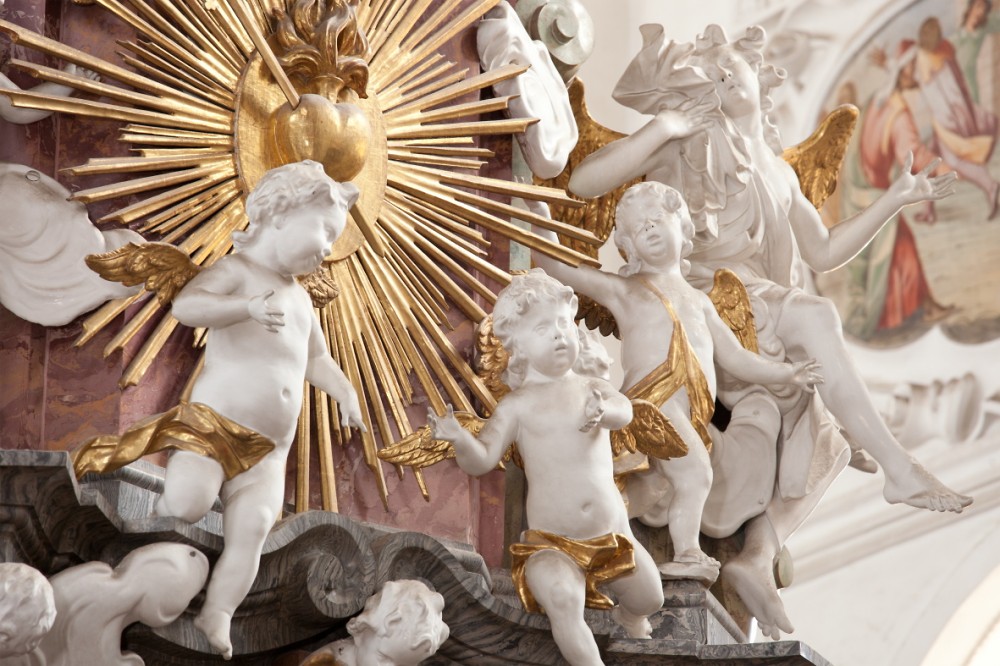 Among the most stunning impressions is the opulent, completely preserved interior in the Catholic Abbey Church of St. ... 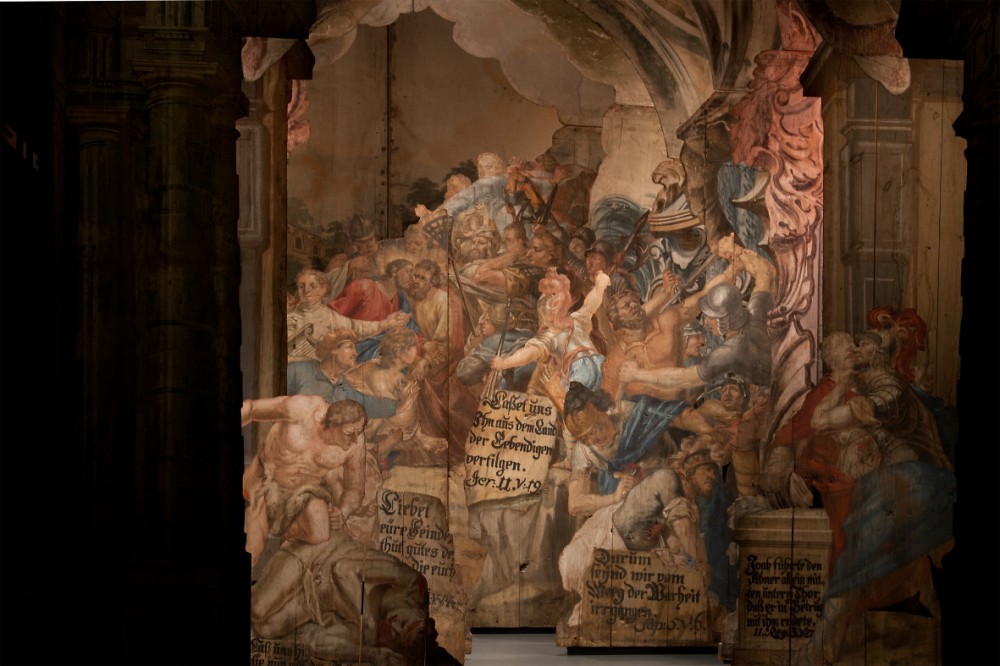 The Museum of the Heavenly Theatre displays the most valuable treasure in the monastery: a Passion depiction of the Holy ... Nestled in the enchanting environment of the Orangery, Kulturcafé Barocco invites guests to enjoy a snack in summer. 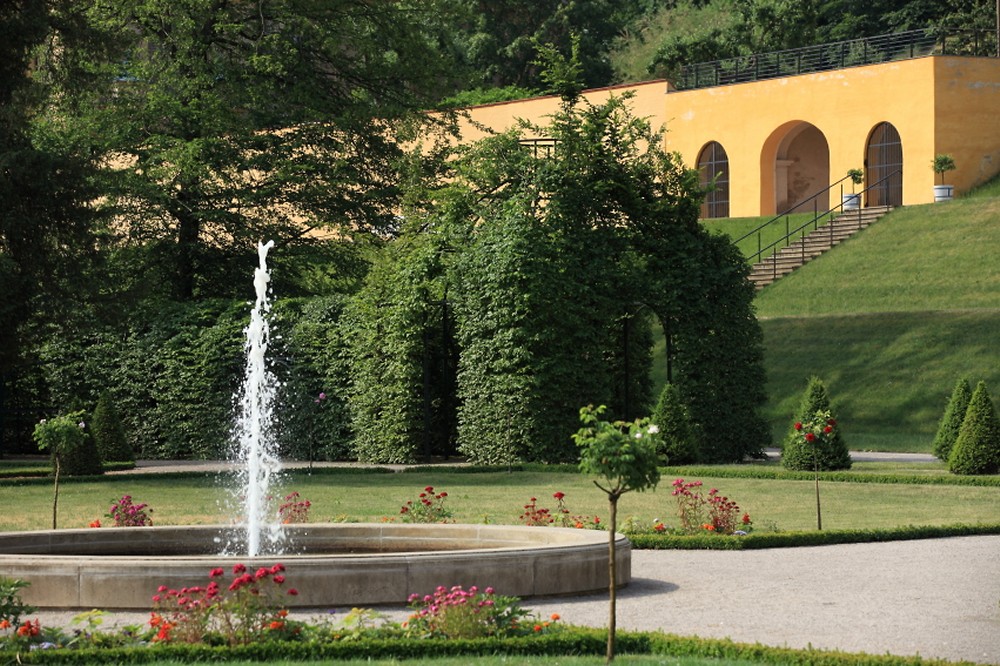 The Baroque Abbey Gardens are situated behind the garden gate. Here you can enjoy one of the most ... 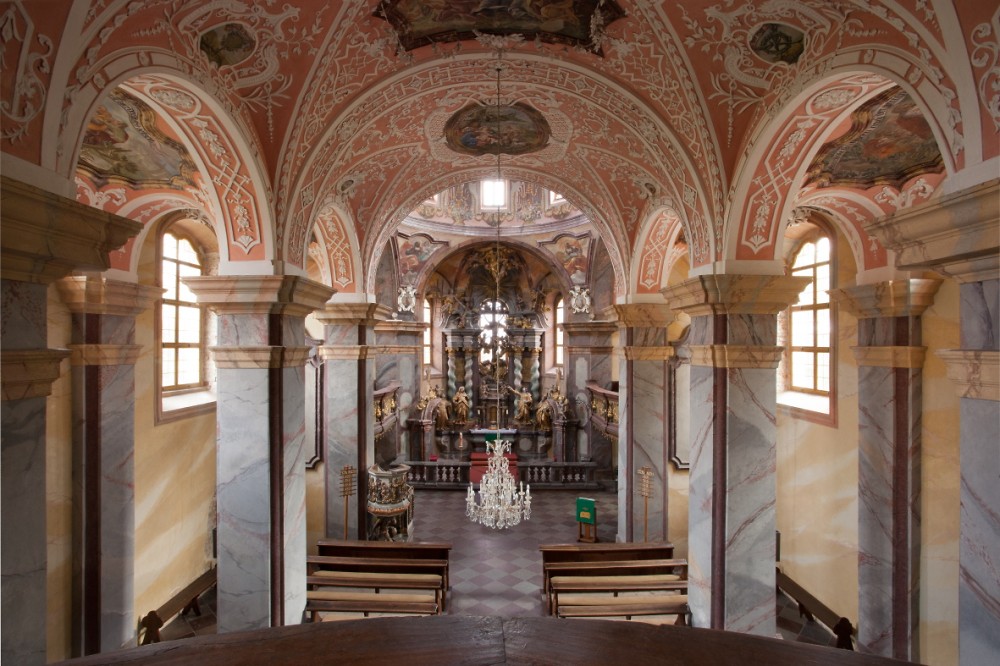 The Protestant Church of the Holy Cross stands a little off to the side, as it was built as a church for the common ...

A magnificent, complete work of art

The beautiful view of the complex from the Abbey pond gives a foretaste of the cheerfully southern, overall atmosphere of the monastery, which sets it apart from the preponderance of redbrick that otherwise dominates the architecture in Brandenburg. The late Gothic complex was redesigned in the magnificent style of Bohemian Baroque from 1650 onward – a consummate work of artistic and intellectual splendour that left contemporary visitors awestruck with amazement and continues to do so today.

With its two Baroque churches, the Baroque Abbey Gardens, the late Gothic cloister and its artistic treasures, Neuzelle is among the most significant Baroque and artistic monuments in the east and north of Germany.

All aspects of the complex will be beautifully presented to mark the 750th anniversary of the Abbey: concerts, celebrations and artistic installations on Abbey Square, the new exhibition in the cloister and the Abbey Museum, the spectacular, alternating scenery in the Museum of the Heavenly Theatre, the illuminated Baroque gardens or commemorative church services, devotional prayers and concerts in the churches – experience cultural, artistic and spiritual diversity in Neuzelle Abbey.

THE STORY BEGINS IN 1268, WHEN HENRY THE ILLUSTRIOUS, MARGRAVE OF MEISSEN, FOUNDED THE ABBEY.

The cloister and its adjoining rooms were constructed between 1380 and 1450 and have been preserved in their late Gothic style. Impressive ribbed vaults and murals are examples of the finest Cistercian architecture and testify to the importance of the monastery in the late Middle Ages.

Valuable exhibits in the Abbey Museum trace the history of the monastery and its shifting relationships with religious and political events in Germany and Europe, bringing to life its early period, destruction by the Hussites and the golden age during the Baroque era until the dissolution of the monastery in 1817.

Visitors during the anniversary year 2018 can experience the most important exhibition pieces in an entirely new setting. Digital media stations rich with interesting details complement the new exhibition in the cloister. They include the consecration investments worn by Abbott Martinus Graff, which he commissioned in 1741 with exquisite silk embroidery, as well as the Abbey Register of 1758 containing the original plans for the Baroque Abbey Gardens.

THE ABBEY WAS CONSTRUCTED IN THE ODER PLAINS FROM 1300. PERCHED ON A ROCKY SPUR – CLOSE TO HEAVEn.

Among the most stunning impressions is the opulent, completely preserved interior in the Catholic Abbey Church of St. Mary’s. Angels, saints and representations of the Madonna are practically innumerable. Most likely the Bohemian master builders sought to convey an impression of heaven when they transformed the original Gothic church into a veritable jewel of the Baroque period during the 17th and 18th centuries.

After the Thirty Years’ War (1618–1648), Neuzelle Abbey became a Catholic “island monastery” in a Protestant region. It is hardly surprising, therefore, that the Baroque representation of theological content is truly staggering – a magnificent, overall artwork portraying an impressive world of imagery and thought.

The Abbey Church has been used as a Catholic parish church since dissolution of the monastery in 1870. Today, St. Mary’s is the pilgrimage church in the Diocese of Görlitz. The 750th anniversary of its foundation will feature church concerts, commemorative services and pilgrimages. The Cistercian monks from the Holy Cross Order invite visitors to take part in the hourly devotions that are held every day.

PURE BAROQUE: THE GOTHIC ABBEY CHURCH WAS REDESIGNED FROM 1650 ONWARD – AS AN ANTECHAMBER TO HEAVEN ITSELF.

The Museum of the Heavenly Theatre displays the most valuable treasure in the monastery: a Passion depiction of the Holy Tomb (1750) that is unique in Europe.

The suffering, death and resurrection of Jesus Christ are depicted on huge canvases and wooden panels in the style of monumental backdrop theatre. Fifteen gripping scenes in five stage sets trace the events unfolding in the Bible. The Neuzelle Passion cycle is a masterpiece of engineering as well – an artistic and intellectual treasure: heavenly theatre!

Two of these imposing stage sets and their matching scenery will be permanently exhibited in their original size. For this purpose, a unique museum was created in the former carriage house of the monastery, allowing the use of sophisticated lighting technology to perfectly highlight the effective depth of the scenes themselves.

There will also be a change of scenery in the Museum of the Heavenly Theatre during the 750th anniversary of Neuzelle Abbey. Following elaborate restoration, another stage set will be presented to a wider audience for the first time during the anniversary year 2018.

THE THEATRUM SACRUM BY THE BOHEMIAN ARTIST JOSEPH SEIFRIT WAS PROBABLY FIRST PRESENTED IN 1753.

The Baroque Abbey Gardens are situated behind the garden gate. Here you can enjoy one of the most beautiful views of the Oder landscape! Spread over five hectares, the park was restored according to the original plans from the Abbey Register of 1758. The only Baroque gardens in Brandenburg, they are among the most significant of their kind in Germany.

The Baroque layout of paths, water features are beautiful old trees delight visitors as much as the terrace complex, which transforms the natural slope into a stunning example of garden art. Nestled in the enchanting environment of the Orangery, Kulturcafé Barocco invites guests to enjoy a snack in summer. In winter it is used to house the over one hundred citrus trees and other potted plants.

The Baroque gardens will be transformed into their own artwork in the anniversary year 2018, blossoming with new life and vigour. Neuzelle invites visitors to a fabulous and very special garden party – celebrate with us and enjoy the heavenly environment.

Barrier-free access to the Abbey Gardens is possible via the South Gate!

THE ONLY BAROQUE GARDENS IN BRANDENBURG – RESTORED ACCORDING TO THE ORIGINAL PLANS FROM 1758.

The Protestant Church of the Holy Cross stands a little off to the side, as it was built as a church for the common people, while the Abbey Church was reserved for the monks. This ecclesiastic building is another testimony to splendid Baroque architecture. The fresco in the dome measures 128 squaremetres, giving believers a glimpse of the heavens in the truest sense of the word.

The cross-in square structure was erected at the location of the former Gate Chapel from the 14th century. It has been used as a Protestant parish church since the dissolution of the monastery in 1817, while the former convent chapel of St. Mary’s has remained Catholic. Today both congregations are located in the immediate vicinity of the Abbey complex. A remarkable feature in Brandenburg – Neuzelle is living testimony to the ecumenical spirit.

And when the 750th anniversary of Neuzelle Abbey is celebrated in style in 2018, the smaller jubilee “200 years of the Protestant Parish Church of Neuzelle” will also take place – with commemorative church services, church concerts, ecumenical events and exhibitions.

THE CHURCH OF THE HOLY CROSS HAS BEEN USED AS A PROTESTANT CHURCH SINCE SECULARISATION OF THE MONASTERY IN 1817.

All events for 2023 will be published here shortly.

Tickets are available online as well as from all box offices by Reservix Ticketshop and on-site at Visitor Information Neuzelle.

Our range of guided tours provide interesting insight into the history, significance, architecture and art of Neuzelle Abbey. Lasting around two hours, the “Baroque Abbey” tour takes visitors through the Catholic Abbey Church of St. Mary’s, the Protestant Parish Church of the Holy Cross, the Abbey Gardens and the Museum of the Heavenly Theatre. The “From Gothic to Baroque” tour lasts approximately one hour and introduces visitors to the late Gothic cloister, the Catholic Abbey Church of St. Mary’s and the Abbey Gardens.

Coming from Beeskow:
B 246 to Eisenhüttenstadt,
B 112 in the direction of Guben

Coming from Berlin:
RE 1 to Frankfurt (Oder),
RB 11 to Neuzelle

Coming from Cottbus:
RB 11 to Neuzelle

We look forward to your visit!

Thank you for your support